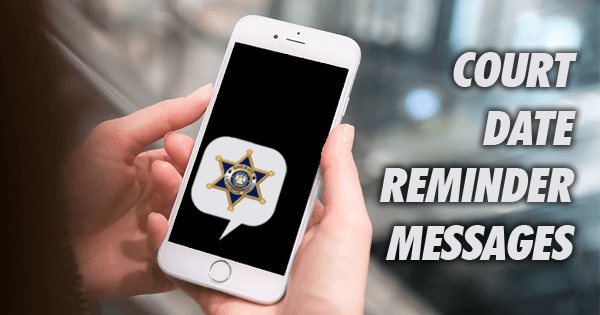 Sheriff Craig Webre announced the Lafourche Parish Sheriff’s Office will begin rolling out a new notification system for upcoming court dates. The message will also give the recipient the option to pay the fine associated with their citation or summons in lieu of attending court. This system is aimed at curbing the large number of contempt of court warrants issued for people who failed to pay or attend court.

“In recent years, we’ve noticed a large number of people being arrested for contempt of court after failing to pay a fine or show up for court,” said Sheriff Webre. “Through our own research, we found many of those people had simply forgotten about their court date. This new notification system will remind those individuals of their upcoming court date and prompt them to contact us if they have any questions.”

When an individual receives a traffic citation, for example, the citation is essentially a summons to appear in court on a date specified on the citation. In lieu of appearing in court, the citation recipient may exercise the option to pay the fines and costs associated with the citation. If the citation recipient does not pay and then fails to show up for court, a contempt of court warrant is issued for that person’s arrest. Then, during the next encounter with law enforcement, such as a traffic stop, the person is found to have an active warrant and would be subject to arrest.

With the notification system, those who have not paid their fine within ten days of their court date will be sent a text message reminding them of the court date with the amount owed and offering them the option to pay the fines and costs in lieu of going to court. If the recipient opts to pay, they will be sent instructions on how to pay by phone, in-person, or online at www.LPSO.net.

“Our goal for this proactive notification system is to curb or eliminate arrest warrants for people who forget their court date,” said Sheriff Webre. “Additionally, we implore those who cannot pay their fines to contact us prior to their court date instead of simply not showing up for court.”

The Sheriff’s Office will use their own records of individual cell phone numbers to issue the text messages. Deputies ask individuals for their cell phone numbers during encounters in order to have the most recent contact information for the individual. Those with phones capable of receiving MMS messages will receive the notification. The first incoming message will be free, and all subsequent messages would be subject to charges by individual carriers if applicable.

The Sheriff’s Office will begin rolling out this notification system this month and will test it over the next several months before rolling it out to all individuals for which cell phone numbers are available. This means that only a small group will receive the message during the testing phase, and even after full implementation, the messages will only be sent for those with up-to-date cell phone numbers. Above all, this message system is a courtesy. Failure to receive a text notification does not absolve anyone from their responsibility of paying fines and costs or attending court.