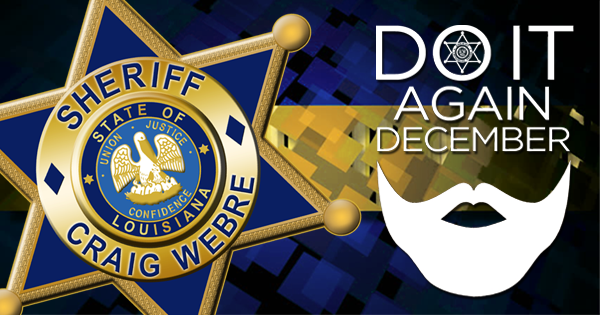 Sheriff Craig Webre announced the Lafourche Parish Sheriff’s Office will extend its “no shave” fundraiser for another month. LPSO raised nearly $4,000 for the American Cancer Society through this year’s No Shave November fundraiser. For Do It Again December, deputies can keep their facial hair for an additional donation, this time to benefit both the American Cancer Society and the Special Olympics.

“With everything that 2020 has brought, we wanted to do something positive for our employees while also giving to a worthy cause,” said Sheriff Webre. “With the continued success of our No Shave November fundraiser, we decided to extend these fundraising efforts to the month of December. Through the American Cancer Society’s Relay for Life and the Law Enforcement Torch Run for Special Olympics, the men and women of our agency annually give to these worthy causes, and this is just one more way in which we will contribute this year.”

The public is welcomed to join in our efforts to participate to raise money for this great cause. Checks can be made out to American Cancer Society or Special Olympics and dropped off at any Lafourche Parish Sheriff’s Office location through the month of December.

LPSO Deputies to Keep Beards for “Do It Again December” Fundraiser