Lafourche Parish Sheriff Craig Webre announced a reward is being offered for information leading to the arrest of a man wanted for using another man’s identity to acquire a store credit card.

On December 7, detectives began investigating a complaint wherein a man’s identity was used to open a credit card at a local department store. Through investigation, detectives learned an unidentified male suspect opened a line of credit at the store on November 28, 2017, and made a purchase in excess of $1,500. The subject was captured on surveillance cameras.

Anyone who may be able to identify this suspect is asked to submit a tip anonymously through Crime Stoppers Bayou Region by phone at 1-800-743-7433 or online at www.crimestoppersbr.org. Tips can also be submitted using the P3 Tips app on your mobile device. Tipsters could be eligible for a reward of up to $1,000 in cash if the information leads to an arrest. 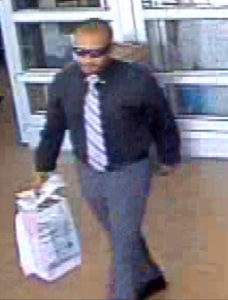